Life is Simple, Eat, Sleep, and Hike (A Hiker’s perspective on the “simple” life)

(The following is a bit longer of a post than I will usually make, but this is something I wrote a number of years back after my walk on a short portion of the Appalachian Trail. I hope you enjoy!)

As my family and I were spending some time together in West Virginia a few days before my walk on the AT, I browsed a gift-shop that was outside of the cavern tour we had just taken. I came upon a T-shirt that read, “Life is Simple, Eat, Sleep, Hike.” Why did I find this slogan so catchy and compelling? For one, it struck me as true. Perhaps not the “whole” truth (can’t fit it all on a t-shirt!), but all the same, it captured some of my core convictions and observations about life. Also, I had been thinking a lot about Jesus’ sermon on the mount because the congregation we left behind on my sabbatical was studying this sermon. I immediately related the words on the T-shirt to Jesus’ instructions to His disciples in Matthew 6:25-33. You might remember the passage. Jesus, among other things is teaching His followers to not worry about clothes, shelter, and food. It’s not that those things are unimportant, but His message to them was simple, as He urged them . . . “Steep your life in God-reality, God-initiative, God-provisions. Don’t worry about missing out. You’ll find all your everyday human concerns will be met.” (Matt.6:33, MSG) 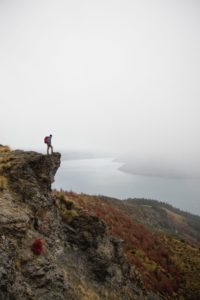 Then there are Jesus’ words in Matthew 5:6: “You’re blessed when you’ve worked up a good appetite for God. He’s food and drink in the best meal you’ll ever eat.”
It seems Jesus’ intent in the above passages is to remind us that life really is simple (though not always “easy”!) when we remember (trust) that we have a Father who cares for us. When we forget this, or, do not believe His heart is good, we end up trying to provide for ourselves. We “fuss” about our eating, sleeping, and walking. Words like “anxious” and “worry” show up in other translations. We become like the pagans (those who do not know our Father), who, instead of a simple hike, end up “running” after food, drink, and shelter. When we forget the goodness of our God and His care for us, we are no longer content with “just food”, it has to be the best food, the best drink, a bigger house and the latest, trendiest clothes. The new IPod becomes old after a few months as the new model is rolled out. Forgetting God and His goodness, “life” becomes increasingly complicated, messy, dark and distracting. As for my six short days on the trail, while nothing I ever did was harder, it did remind me that when I trust I have a good and loving Father, life really is simple. I eat, sleep, and walk/hike in His world for His pleasure. The Apostle Paul, in a thank you note to one of his supporting churches said something similar,
“Not that I am speaking of being in need, for I have learned in whatever situation I am to be content. I know how to be brought low, and I know hot to abound. In any and every circumstance, I have learned the secret of facing plenty and hunger, abundance and need. I can do all things through him who strengthens me.” (Philippians 4:11-13, ESV)

For Paul, while life was often very hard, I believer he had a simple approach to life. He was a “one thing” (see Philippians 3:13) sort of guy, living in a simple dependence upon His Father. Even in abundance, life was simple because he didn’t let “stuff” clutter his devotion to and dependence upon Christ. When we live like this, we are reminded in wonderful and mysterious ways, that God (not our retirement plans) becomes our food and drink, our sustenance for life in this world.

Simple is not Easy! I mentioned in the introduction that when I set out to hike a small sliver of the AT, I had originally planned a 13-day 165-mile trek. I finished, 6 days and 63.7 miles later, deeply torn in toes and emotions, and more than a bit disappointed. What happened? The big answer can be summed up in two words: ignorance and blisters!

As for ignorance, I truly had no idea what I was doing. I had never backpacked before, all my gear was new, but I remember thoughts such as the following . . .

– “How hard could it be?” (we’ll discuss this in chapter two!) I’m in reasonably good shape.”

– “I can’t wait to experience the beauty and solitude of the woods.”

I should’ve caught the Shenandoah National Park Ranger’s ominous tone when, upon looking at my hiking plan asked, “Do you have any idea what it’s like to hike in Virginia’s humidity and heat this time of the year?” I brushed him off, saying something like I was born and raised in central Illinois and was used to heat and humidity. (I later learned that for the first 3 days of my hike, a heat-index record was set for those dates. Something like 115 degrees!). But, ignorance and all, I was chipper and excited to go. Until the blisters! I walked so fast and furious the first day (14.5 miles with a much too heavy pack!), blisters began to appear. Sleep was good the first night, as I set up camp at a shelter, thoroughly exhausted as I had hiked 15 hours that day. I attribute this to ignorance as well! I had no idea it would take me that long. After all, I averaged 15-20 minute miles in my training around my home in Grand Rapids Michigan. Yet, on the AT, it took me on average, about one hour to hike one mile. “Simple is not easy!” The difficulty of the task become clear as my feet got worse with each step. I was told later that my boots should have been a half-size larger! I simply couldn’t walk any further, so, I stopped walking, hitched a ride into town and found a hotel. I was both mad and sad because I felt like a failure, but relieved that my open-blistered feet could rest. Again, I was remind that this “simple” hike was not to be mistaken for an easy one.

Keep Walking! I’ll spare you any more recounting my many rookie backpacking mistakes. I hope someday that I’ll have both the time and health to take another crack at the AT or some other trail. Upon exit from the AT and reflection at the end of my sabbatical, I was asking God some hard questions. The sabbatical had afforded me the time where I had just begun to enter a rhythm of rest, and felt ready yet somewhat apprehensive to re-enter vocational pastoral ministry. I asked God a simple question. “Now what do I do, how do I keep this healthy rhythm of work-rest going?” The answer I received from God was immediate and clear: “Keep Walking” He said. “Keep walking”. So, I have walked. My walks have become my prayers. I listen. I talk to Him, but often I’m just there, present before Him. Nothing spectacular or flashy, just step-by-step, being before Him.
Upon return from sabbatical and my reentry into ministry in November of 2007, my daily minimal goal is 10,000 steps. As of 11/10, I have walked a total of nearly 11,000 miles (and counting!) of walking. There has been only one day (Dec.13, 2009 – terrible flu!) where I failed to meet my minimum goal. Walking (with God) is changing my life. It has kept me both sane and satisfied. More of that later!

Yet, the hardest thing about walking (and life!) is just doing it everyday. It is a daily non-glamorous call. It’s often, as an old negro spiritual would say, a “tedious journey.”
Again, “simple” should not be equated with “easy.” Life can be hard and heart-breaking. You don’t have to live long to realize that. But the hardness of life can be softened a bit as we focus on a simple trust in our Heavenly Father, reminding ourselves that He knows and loves to meet the needs of His kids.
IF this is true though, that life is simple, why are we often confused and things seem so complicated? Perhaps our friend Bryson can help again. Sharing about his own AT experience, he says that step by step,

“Life takes on a neat simplicity too. Time ceases to have any meaning. When it is dark, you go to bed, and when it is light again you get up, and everything in between is just in between. It’s quite wonderful, really. . . All that is required of you is a willingness to trudge.” (Bryson, A Walk in the Woods, p.70)

I would suggest that life gets complicated when we focus too much on the “in between” stuff in our walk rather than the walk itself. We do this, I suggest, when we want to control the details of life, how our walk will look, how fast or slow we’re walking, instead of just putting one step in front of the other and simply walking, trusting that God superintends our walk, whether or not it’s going like we had planned. . God’s Word, we are told, is a light, not for the entire “trail”, but for our path, that is, what is right in front of our feet. Just walk, or, as Bryson suggests, ask God for a willingness to trudge. I know in my own life, after I am finished blowing out all of my excuses of why life is so “hard”, it often comes down to the question, “am I willing to walk?” “Trudge” is a good word to describe our walk in this world! Don’t you sometimes feel like you are trudging along? Complications come when I tell God that I’m willing to trudge as long as . . .

I’m meeting my goals for this hike
I’m not getting blisters
It’s not raining too much
It’s not too hot, too cold

We tell God we’re willing to walk, but inwardly, because life might not be working out the way I think it should, I become angry, bitter, disillusioned, and cynical – not a happy hiker! Yet when I walk in simplicity by trusting my Father to color in the “inbetween” times of my life, I am enabled to walk differently than before. The mindset of simplicity sinks in. Writer Roland Mueser reports that,

“David Goode, one of the youngest thru-hikers in 1989, wrote: “For the first time in my short life I was actually living! I ate because I was hungry, drank because I was thirsty, slept because I was tired, and every day I had a goal to achieve,” Others agreed: “I now tend to live more simply . . . unencumbered by things.” (Roland Mueser, Ragged Mountain Press, 1998, Camden, NE, Long-Distance Hiking, p.152)

In my six-days on the trail, I began to remember my Good Father again, and, while life can be hard, lonely, and confusing, it is really simple in its essence. The simplicity is found in being unencumbered by things and in a heart that then echoes the lyrics to the song mentioned above, “Walk With Me Lord”.